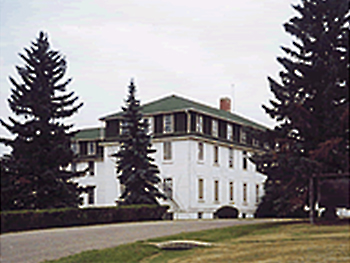 The Old Government House, Built in 1876, is located 1.5 miles south of Battleford on Old Highway No. 4.
From 1876-1883 Battleford was the seat of government and known as the Territorial Capital of the Northwest Territories (now Alberta, Saskatchewan and the Northwest Territories). Battleford and the N.W.M.P. played a significant role during the 1885 North West (Reil) Rebellion.
1878-1882: Lieutenant-Governor David Laird's residence. It was the Government Office and Chambers when Battleford was Capital of the Northwest Territories.
1883: The Capital was moved to Regina.
1883-1914: Indian Industrial School under the Anglican Church.
1916 - 1931: Seventh Day Adventist Academy.
1931: Sold to the Oblates of Mary Immaculate.
1932-1984: St. Charles Scholastic Seminary.
1976: Designated as a Municipal Heritage Site.
1984: Designated a Provincial Heritage Property.
2003: The vacant site - leased to Battle River Settlement Foundation Inc., as part of a restoration project, was destroyed by fire in the summer.

Would you like to be kept up to date of events and notices for the Town of Battleford?